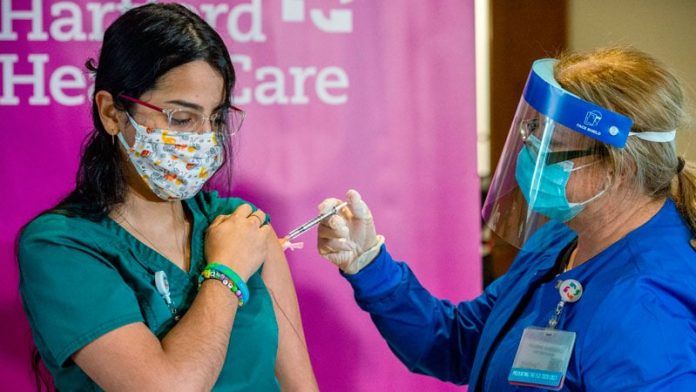 Should COVID-19 vaccinations be required for healthcare providers? Most clinicians polled by Medscape said yes, and the same goes for a majority of consumers answering a similar WebMD poll.

For example, 69% of 998 physicians believe employers should require clinicians get COVID-19 vaccines. Within this group, 7 in 10 said vaccination should be required immediately, whereas 30% said the requirement should wait for full FDA approval.

Within the Medscape poll results, there were some distinctions by sex, provider age, and clinical role.

Too few doctors younger than 25 responded to be included in the results.

Overall, nurses and advanced practice nurses as a group were evenly split, with 50% of 3360 respondents backing employer requirements for COVID-19 immunizations and the other half responding ‘no, never.’

Interestingly, 83% of nurses reported being employees compared with 52% of physicians.

Seventy-nine percent of physician respondents said they were COVID-19 vaccinated, including 75% who were fully vaccinated. Of the remaining 21%, 5% indicated they planned to get immunized and 16% responded they would never get vaccinated.

Some Reasons for Concern

The Medscape poll also asked respondents what, if any, concerns they had regarding the COVID-19 vaccines. Respondents could select any or all from a list of options.

Forty-two percent of physicians said they had no concerns, as did 25% of nurses.

The remainder selected other concerns, such as worries about adverse effects that outweigh the risk for COVID-19; that vaccines from one company may be better than vaccines from another; and speed of development, for example.

The seven-question Medscape poll ran online from April 28 to May 4 and generated more than 200 reader comments.

Similar to the poll of clinicians, people 65 or older were the biggest proponents of requiring COVID-19 vaccinations for healthcare providers. A large majority (87%) of this group backed such requirements.

With the exception of the 25- to 34-year-old group, where 48% of respondents favored required vaccinations, a majority of people in all other age ranges thought mandatory vaccines were a good idea for healthcare workers. Nearly three fourths (73%) of people aged 55-64 supported such a requirement, for example.

When asked how likely they might be to schedule a medical appointment with a doctor they know is not vaccinated, 24% responded “very likely.” Another 9% said they were likely, 20% were neutral about it and 17% said they were unlikely.

Nearly one third (31%) indicated they were “very unlikely” to make such an appointment.

Responses did not vary greatly by sex. The biggest difference was in the “very likely” group, with 4% more men than women choosing this response.

The proportion of people who reported being vaccinated for COVID-19 was 61%, including 48% who were fully vaccinated. Two thirds (66%) of males and 63% of females said they were vaccinated.

The WebMD poll also asked people to report concerns, if any, they have with the COVID-19 vaccines. Thirty-seven percent were concerned that the vaccine side effects would outweigh the risk of COVID-19. The same percentage reported concerns about effectiveness.

In addition, 28% reported concerns about other side effects, 27% regarding speed of development, and 26% were concerned that vaccines from some companies may be better than those from others.

The seven-question WebMD poll ran online from April 27 to May 3.

Damian McNamara is a staff journalist based in Miami. He covers a wide range of medical specialties, including infectious diseases, gastroenterology and critical care. Follow Damian on Twitter:  @MedReporter.