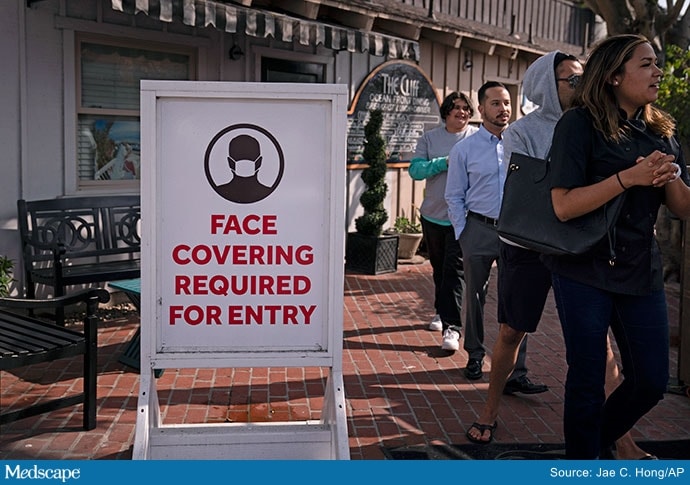 SACRAMENTO, Calif. (AP) — California officials say the state isn’t ready to follow the federal lead and unmask, at least for another month.

The nation’s most populous state needs more time before it will join many other states and allow fully vaccinated people to skip face coverings and distancing in virtually all situations, officials said.

People and businesses must adjust to the changes while the state continues its “relentless focus on delivering vaccines, particularly in underserved communities and those that were hard hit throughout this pandemic,” Health and Human Services Secretary Dr. Mark Ghaly said Monday.

More than a dozen other states, including neighboring Oregon, have already heeded a loosening of mask guidelines announced last week by the U.S. Centers for Disease Control and Prevention. The CDC guidelines say everyone — fully vaccinated or not — should still wear masks in crowded indoor locations such as airplanes, buses, hospitals and prisons.

The shifting ground of mask-wearing advice has confused and frustrated some Californians, who only a few weeks ago were told that that people who are fully vaccinated do not need to wear masks outdoors unless they are at crowded gatherings.

Rafael Sanchez, 64, of San Diego called it “a scrambled egg message.” The retiree is fully vaccinated and said he only wears a mask because it’s required at his favorite bagel shop and on the bus to get there.

Most of the 58 counties in California — including gigantic Los Angeles, Orange and San Diego — are heeding the state’s masking schedule.

“More than half of our adult population remains vulnerable,” she said.

“When I go to a grocery store, I feel like I should still wear a mask whether I truly need to or not,” he said. “I don’t feel like it’s that restrictive.”

His 12-year-old son received his shot Monday but wears a mask to school in person twice a week.

Both the CDC and state plan to keep the mask requirement in place for students for the rest of the calendar year.

Satchita Melina, a psychotherapist in San Francisco, said she agrees with the state’s indoor-mask decision, even though she “can’t wait to go to a gym or yoga class or dance class” without a face covering.

“If it’s going to protect people and if it’s for safety what’s another month at this point?” she said. “I can do it.”

The California Nurses Association said the state was being prudent, noting that more than 61,000 residents have died from COVID-10 and hundreds of nurses succumbed nationwide.

“We must protect the lives of our patients, the lives of nurses, and other health care and essential workers across the country,” CNA President Sandy Reding said in a statement. “We know the best way to do that is with multiple layers of protection, which includes masking as well as social distancing, and isolation following exposure.”

Businesses are expected to adhere to the state’s guidelines, Ghaly said, but some trade group leaders feared the differing federal and state mask requirements will sow confusion.

It is difficult already for business owners to play “mask cop,” said John Kabateck, director of the California chapter of the National Federation of Independent Businesses.

“We hope that they will not be vulnerable to penalties and scrutiny by state regulators or plaintiffs’ attorneys because they’re trying to make sense of this labyrinth,” he said.

But Kabateck said he was generally supportive of the state’s decision.

“If wearing masks for a little bit longer is an ounce of prevention that’s going to let mom-and-pops reopen their doors and get people back to work, that’s a step in the right direction,” he said.

“I think people should still keep wearing it and not have to rely on an honor system,” she said. “I don’t know how else you would know if someone is fully vaccinated.”

After becoming the epicenter for the virus in the U.S. at the start of the year, California has experienced a precipitous decline. The state infection positivity rate among those tested has fallen below 1%, officials said Monday, and more than 34.5 million doses of vaccine have been administered as the state approaches the full reopening of its economy.

Newsom, like the Biden administration, has been under pressure to ease mask restrictions as coronavirus cases decline nationwide. But the Democratic governor faces a recall election this fall driven largely by frustration with his handling of the pandemic.

Forty-seven counties, which account for most of the state’s population, are in the orange and yellow tiers of California’s COVID-19 system, which are the least restrictive. Orange County could move into the yellow tier on Wednesday, which would increase customer capacity for gyms and some other businesses and allow bars to reopen indoors.

Eleven counties remain in the second-highest red tier, where COVID-19 risk is considered substantial, but they represent only around 11% of the population.

The tiers are based on cases, positivity rate and on vaccination figures. Newsom has indicated California will do away with the system in mid-June.